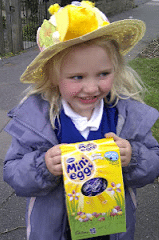 Being a teacher is mostly an asset to a parent. You know what they’re going on about at parents evening, you know that if they say there’s no homework it probably isn’t true. Sometimes it isn’t helpful though. This week Molly had to make her Easter Bonnet for school. She came home with very strict instructions. “If you help me at all, I can’t win. So you’re not allowed to help me. OK mummy?”

I was banished to the other room where I sat on my hands and tried not to offer any constructive criticism. Is a bit like during exam time when you know you can’t help them. So this was a bit like a crafting test. I have taught her all I know about googly eyes and funky foam. Now she’s on her own.

The one thing I could do was provide her with her materials. I put everything out on the table with easy access to PVA glue. I stuck to materials in a few Spring colours, in order to give the bonnet an overall colour theme.

Then I left her to it. The only help I gave was to chivvy her on a bit and to tell her not to leave any gaps or put glitter everywhere.

She cut out a row of eggs using different coloured sheets of foam. She started putting these in a pattern around the edge but got a little bored. She stuck on loads of flower and egg stickers as well as some little chicks. At the front is a huge pom pom chick with googly eyes and foam beak and wings. She was going to make more of them but decided not to.

Her sister was not hugely helpful during the whole process, deciding instead to throw everything on the floor and to have a huge tantrum because I wouldn’t give her glue.

This morning I found Molly wearing her hat before she had even had breakfast. She is tremendously proud of her creation. I now have to convince her it doesn’t matter if she doesn’t win, while secretly hoping that she does.

She managed to keep it on her head the whole ride to school. I didn’t like to tell her she looked slightly loopy!