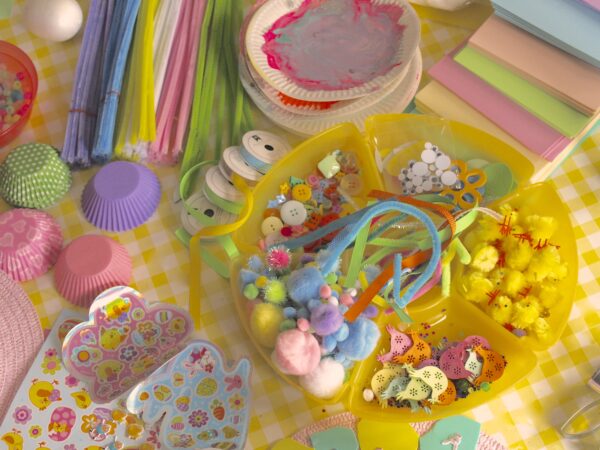 Every year the girls have an Easter bonnet competition at their school. It is a lovely craft because you get to wear it and they only choose a winner who has made their hat themselves without any help from adults. I think this is really great and takes the pressure off as parents don’t feel they have to make something amazing. It’s hard to step away at first and sometimes I have to sit on my hands to stop myself from interfering.

So what I do is layout a shed load of pretty craft materials and leave them to it.

How To Make An Easter Bonnet

They also had standard craft materials like scissors, glue, sticky tape, card board.

My eldest, who is six, also had her sewing box.

I would love to say I tidied away but the kitchen table still looks like this – although with bits of glue everywhere and fluffy chicks on the floor. Oh well at least all the materials are ready for some egg decorating at the weekend.

The interesting thing is seeing how the children approach this task. Charlotte made lots of craft foam eggs by drawing round a cookie cutter. She is really into making patterns at the moment and so enjoyed sticking them round the brim in a pattern. After that she went wild adding everything she could see. Her bonnet is certainly colourful!

Rose didn’t want to make a bonnet at all. She was really against the idea, although she liked wearing her plain bonnet. Then she found some pretty scraps of felt I was making some eggs with and cut out some eggs from them. Again she didn’t want to put them on her bonnet.

I eventually persuaded her into making a hat by laying out her favourite craft – beading. I gave her pipe cleaners and easter coloured beads and she threaded them. After that nothing was stopping her. There were pom poms, twin bunnies and even those felt eggs she had made. Half way through she decided she loved decorating bonnets and her was the loveliest bonnet ever.

Molly is six and had a very clear picture of what she wanted to do in her head. There was no way I could help, even if I wanted to. She covered the hat with cotton wool. Used two paper plates stuck together for the face and cut out eyes and ears with craft foam. She made the mouth and some flowers with pipe cleaners and made her own pom pom for the tail.

The part which took the longest were her felt carrots. She drew a template of a carrot and cut it out then sewed them together and filled with lentils. We had done this a week or so before to make some felt eggs. I did help a bit here, threading the needles, but the rest was her work. I also had a stress because she kept losing her carrot template and she wouldn’t listen when I told her it had to be bigger than the finished carrots as you would turn it inside out.

Once she had made the carrots Molly sewed them onto the hat. They got a bit tangled as she put them too close together.

She was very pleased with her finished bonnet, especially because it was her own idea.

The twins loved their bonnets as well, although getting a nice photo of them wearing them was a bit tricky.

It took a bit of time to explain to the twins that not everyone could win. It’s hard for three year olds to grasp.

For more easter bonnet ideas here are the creations we made in previous years.

How to make an Easter Bonnet

This was a papier mache chick

Easter Bonnet for a 4-5 year old