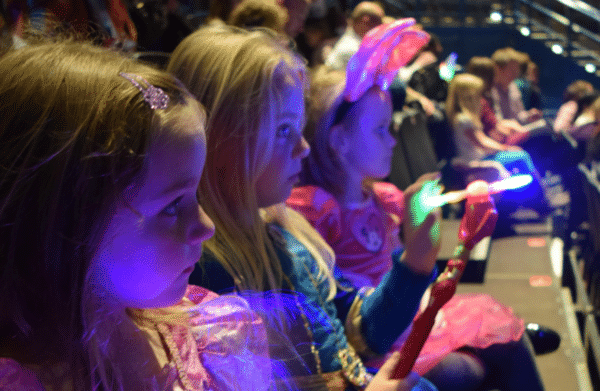 When the email came through on Monday saying we had tickets to Disney on Ice World’s of Enchantment there was screaming, a lot of running around the room and jumping with excitement.

And then I told the children.

Seriously though, the BEST thing about having children is that you get to legitimately go and watch Disney on Ice shows. They are fantastic entertainment. I can still see us going even when I have to drag the girls along when they are in their twenties and need to get up for work in the morning. Luckily they are still just as excited as me.

So yesterday we went to the Barclaycard Arena (formally the NIA) in the centre of  Birmingham to see the show. It starts at 7pm, which is a little late for a school night but as it was nearly half term it seemed worth it. As the first day of the Birmingham part of the tour, it was a little quieter than normal but still lots of atmosphere. You can’t beat a roomful of children dressed as Elsa for levels of excitement!

Disney on Ice features shortened versions of several Disney classics. In this case, it is a fantastic selection: Toy Story, The Little Mermaid, Cars and finishing with Frozen. Minnie and Mickey Mouse act as hosts throughout, clumsily helped out by Donald and Goofy. We have seen Worlds of Enchantment a couple of years ago and loved it then, but it has seen a big update and is even better.

I think this is the best show if you are going with a group of boys and girls, or with girls who have started to grow out of princesses. It is also good for older audiences as there is a bit more story telling. Toy Story, in particular, is a more complex story line and the ending where Andy gives away his toys is really moving for adult audiences in this version.

Toy Story is a brilliant place to start with the show. You wouldn’t think it was possible to convey such a long film into a short section of the show, but it is adapted brilliantly. All the best parts of the film are there and cleverly set to music. I loved the sequence where Ken shows off his wardrobe to Barbie, it is even funnier now. Other favourite scenes are the toy soldiers dance and who could forget seeing giant potatoes dancing on ice. We love the fact there is a giant Lotso too as he looks so cuddly and is Molly’s favourite character.

This year we were most excited to see the Little Mermaid sequences. A few weeks ago we met with a couple of the Disney on Ice dancers for a private dance lesson to try out their Fit to Dance lessons. They told us to look out for a bright orange sea horse and when the girls saw their new friend they got really excited and were convinced she saw them and waved. They were also amazed that they had learned the actual real dance from the finale. It was lovely to see them getting up and joining in! The Little Mermaid sequences work wonderfully on the ice. The big set pieces on Disney on Ice are spectacular. Whether it is a chorus of dancing bees and flowers singing with Olaf, or a parade of colourful sea creatures under the sea it is a glorious spectacle.  For me, the best thing is the skating. I love to watch the tricks and spins of the solo dancers ad how the dancers capture the character they are playing in a few moves and gestures.

The second part of the show is Cars and Frozen. It is very well paced and four very separate shows are put together really well into one entertaining package. Although, the girls are not really into the movie cars, they were fascinated with how there were cars on ice and how they could move about by themselves. The big draw for the evening was always going to be Frozen, this part of the show has been updated since Magical Ice Festival. The costumes really brought the characters to life and it was really clever how Elsa was transformed into her snow dress and how Anna became Frozen. The addition of falling snow made the performances even more beautiful and the pyrotechnics add an extra spark of excitement. There was a lot of excitement from the audience in this part of the performance, big cheers when Olaf appeared and cries of amazement when the ice palace appears – it really is magical.