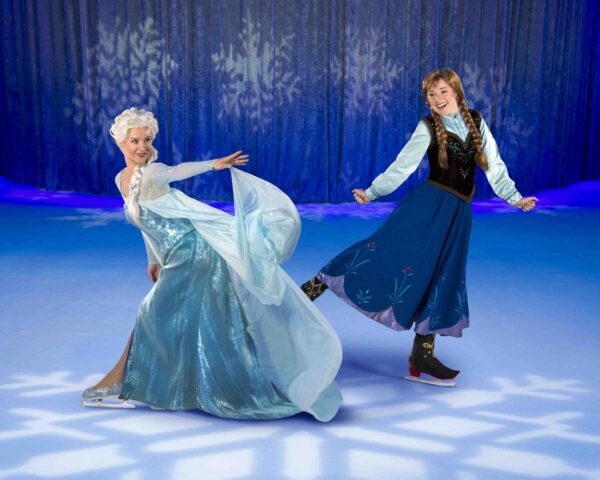 The best thing about having children BY FAR is having a legitimate excuse to go to Disney on Ice events. Before I had children I borrowed my nieces until they got too old. Now I can take the girls every time and everyone thinks I’m going because of them. He he! Luckily the girls love the shows too and we were all really excited to learn about the new show Disney on Ice Magical Ice Festival

It was almost as if the producers of the show had written it specifically for my girls. It featured all their favourite Disney stories: The Little Mermaid, Tangled, Beauty and the Beast and finishing with their current favourite Frozen. There is even a small part of Cinderella. Except for Frozen we have seen the other stories told in previous Disney on Ice shows, however we loved the spin on the story telling and the costumes and dances were all really different.

The show opens with Minnie and Mickey and they lead you into each story in their fun way. They have the help of Goofy and Donald a a troop of skaters with cheerleading batons which light up.

The show opens with the colourful Little Mermaid with some stunning arial acrobatics and colourful costumes. Molly was amazed by Ariel’s acrobatics as she didn’t have a safety rope and was so high up.  My favourite part was the set piece of Under the Sea with all the fish and sea creatures dancing together in a lively uplifting set piece.

Tangled is Charlotte’s favourite Disney film and she was delighted that her favourite song “Mother Knows Best” was included.  She loved when Rapunzel suddenly appeared from amongst all the ruffians wearing a pretty dress. The Floating Lanterns scene is really beautiful. We all thought the ice skaters in the Beauty and the Beast section was the best. There were some breathtaking lifts and tricks. The Be Our Guest dance with hundreds of knife and forks dancing in sequence was so fun. I loved the clever touches, especially the library revealed and when Beast is transformed into a handsome prince in a flash of magic.

What we were all really there for was Frozen. The cheers which went up when the characters came on was huge. Again there was a twist on the storytelling with the story starting with Kristoff and a huge and cuddly Sven meeting Anna for the first time.

There were so many highlights in this section as we loved it all. The combination of snow and fog and ice skating was simply magical. The biggest cheer of the night was for the arrival of Olaf and everybody loved his “In Summer” song – it even had a chorus of dancing bees. The buzz from the audience was wonderful as everyone joined in belting out their favourite songs from the show. I was really impressed with the characterisation of Anna and Elsa. The skaters were those characters while they were dancing and their costumes were beautiful.

Rose (aged 4) loved the part with Elsa’s powers. She said “I don’t know how she did that! Maybe she had real powers!” There were also some clever ways the dress transformed and where Anna was turned to ice at the end. I think they could have made the whole show just Frozen. We would have loved to have seen a full version of “Do you want to build a snowman” and it would have been great to see

As well as the show it is also wonderful to see all the children in costume. We had twin Elsa’s complete with Elsa plaits and this was definitely the costume of the day. This was the first time we had taken the girls to the 7pm performance, we usually got to the matinee. Despite the late hour, they loved the whole thing kept going through the whole performance. There were some younger children who were struggling at this time and just wanted to go to sleep.

As usual the cost of merchandise was eye-watering. We did buy some candy floss but mainly because it had an incredibly cute Olaf mask with it. Luckily I had remembered to bring baby wipes this time as it gets a bit sticky!

The best part for me is seeing the look of delight on the children’s faces. It really is a magical ice festival.

There is still time to see the show until the 17th May 2015 in London, Cardiff, Nottingham and Leeds. Click here for ticket details and show times.

For another review of this performance see  Me and my Shadow

Disclosue: We were given a family ticket to the show for the purposes of this review