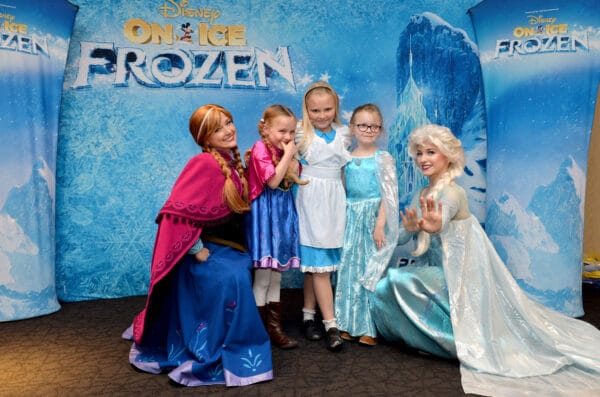 I don’t think you could get a more perfect story for Disney on Ice to portray than Frozen. It has wonderful songs, bright colourful costumes, snow and ice and even ice skating at the end. We had seen the Disney on Ice where the second half was devoted to Frozen and this was really amazing. But the girls came away missing their favourite songs so we were delighted to see the full story brought to life. 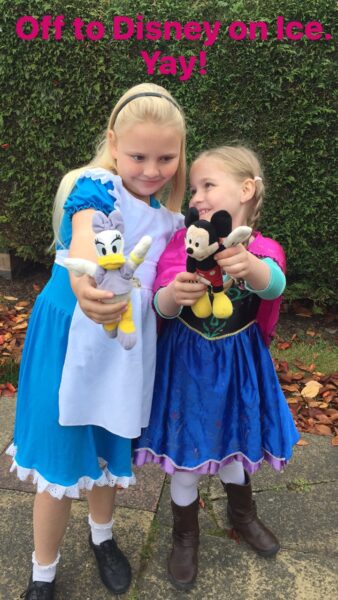 It’s easy to tell that Disney on Ice has come to town. Before the show, there is a steady stream of little princesses and princes as everyone arrives in a costume. There were even a few parents who had dressed up for the occasion this year. There were a lot of Elsa dresses in the audience. The twins dressed as Elsa and Anna (of course) and Molly went as Alice In Wonderland. I’d love to say I dressed up but maybe next time!

We were really lucky to be given a special meet and greet with Anna and Elsa. The girls loved meeting them and gave them a big hug. Elsa asked Rose if she had made her dress which made them all giggle.

The show itself was spellbinding. It was introduced, of course, by Minnie and Mickey and the first dance featured cameos from all our favourite Disney films. 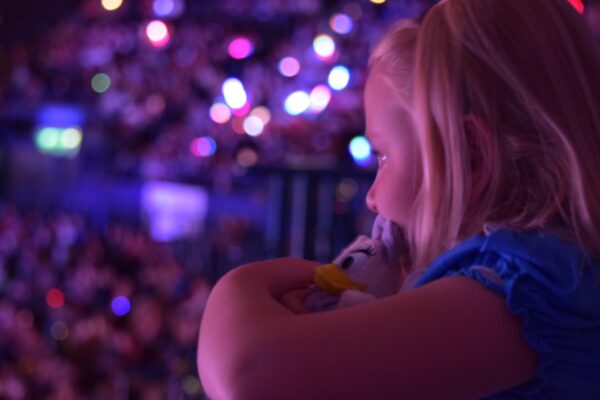 The show is brilliant for young children because they are encouraged to sing and dance. Everyone sings along and gets really into it. Ok I mean it’s good for me because I love to sing along! The first part skips along brilliantly. There is something about the combination of skating and music which makes me feel emotional. I loved the version of Do You Want to Build a Snowman told on Ice. It was very touching to see a young Elsa and Anna building Olaf. Anna is sweet and clumsy and so naive. The ballroom scene is lovely with also the dancers whizzing over the ice. One of the highlights of the first half was as skating Sven the reindeer. So cute! The wolves were really scary with flashing eyes. You could tell that everyone is waiting for Els’a big number Let It Go!  It didn’t disappoint. 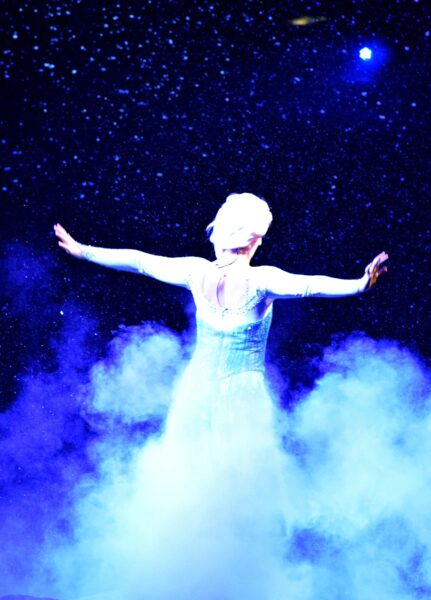 The part of Frozen where closeted repressed Elsa finally lets herself go is so magical. On ice, this is really magnified. There is smoke and falling snow and Elsa emerges in her beautiful dress. 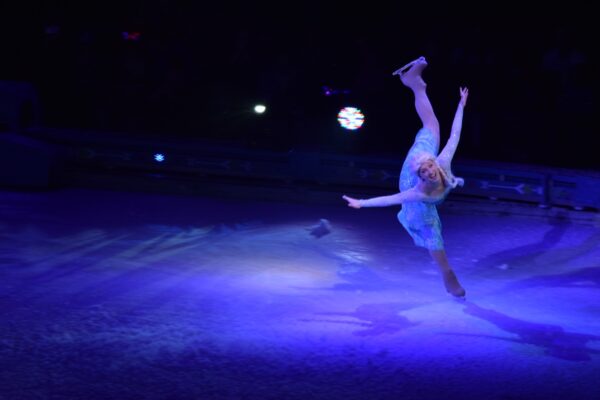 Elsa’s dance is really wonderful and shows such freedom. The snow falling is jut perfect.

I really love how the simple set enhances the action. The ice palace is simple but looks perfect. Elsa gets a perfect diva moment climbing the staircase and I don’t think there was one person in the audience who wasn’t singing along.

The girls were so happy in the interval they had loved the first half and couldn’t wait for the second.

The second half was just as brilliant. We loved Olaf dancing with a chorus of birds and the bees. 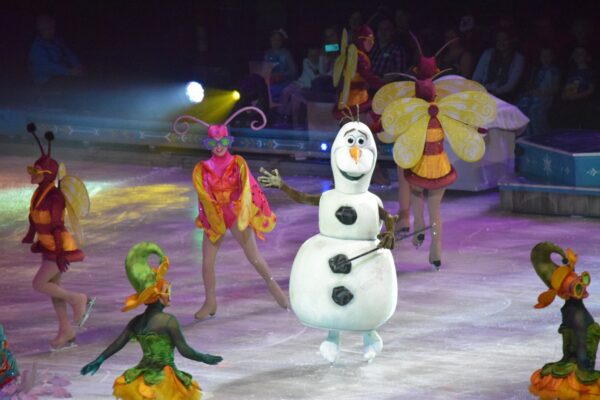 We were blown away with Marshmallow. He was huge and inflates on the ice and even breathes smoke. Charlotte was really pleased as he is her favourite character. I was wondering how the trolls would appear and wasn’t disappointed. Huge rocks roll onto the ice and the trolls have clever costumes which look like they are two trolls standing on each other’s shoulders.

This show is really amazing. I was a little worried the girls would be into it as it was a while since the film was out but they were transfixed. We can’t wait for the next Disney on Ice show and looking on the Disney on Ice instagram feed an Inside Out show might be on it’s way. How amazing would that be?

To see another review from the evening read: OUR DISNEY ON ICE FROZEN BIRMINGHAM EXPERIENCE from Mrs Shilts

Disclaimer: We were given VIP tickets to the event by #MothersMeetings