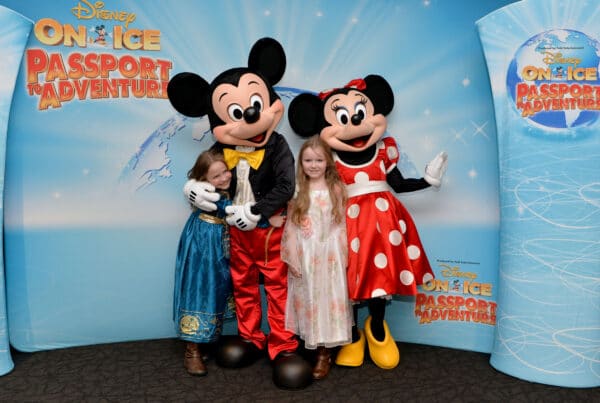 Earlier today I was asked if it is worth taking a young child to see Disney on Ice Passport to Adventure. The answer was an unequivocal YES! It is such a wonderful feel-good family show with fantastic ice skating, special effects, wonderful costumes, all your favourite Disney characters and your favourite songs, plus you can go dressed as your favourite character. What’s not to love!

Many Disney Stories All In One Show

The Passport to Adventure show is particularly good as it features such a strong combination of stories. Some show, such as Frozen are just made for ice skating! This year there are four separate stories, The Lion King, The Little Mermaid, Peter Pan and Frozen. Each section is linked together by our favourite hosts, Mickey, Minnie, Donald and Daisy and of course Goofy.

This year we were given little passports to fill in as the girls complete each Fit to Dance activity. They had some cute stickers for each section too. You can find out more about Disney on Ice Fit to Dance here and discover how you can use Disney on Ice as a starting point for becoming more fit and active.

We were very lucky to have been invited early and got to meet Mickey and Minnie before the show. These are their all-time favourite characters so it was really amazing to get a photo with them. As you can see the twins love to dress up for Disney on Ice. This year they went as Merida and belle from Beauty and the bBast.

The girls get so excited when they hear that there is only five minutes until the show starts!

It’s definitely worth getting to the show on time because it starts with a Disney Fit to dance warm-up show including some of the characters from Zootropolis. This was a great way to start the show as the characters got everyone up on their feet and dancing.

It’s hard to pick a favourite part of the show. For me, the highlight this year was the incredible ice skating. The Lion King section was mesmerising. The tricks and lifts were amazing.

The new addition to the show this year was the Peter Pan section. It was introduced by Mickey and Minnie travelling to London and dancing Mary Poppins style with a London Policeman, which was hilarious. The story was great fun and I loved how the staging used multiple levels. It was magical when the characters learnt to fly and the girls loved seeing Tinkerbell sprinkling generous amounts of fairy dust.

The huge pirate ship and the giant crocodile at the end were really fantastic, as Captain Hook finally met his match. This section of the show felt a little flat simply because the songs from Peter Pan are not as important in the film and are definitely not as memorable. I think Disney on Ice works the best when the songs and skating work together beautifully, Can You Feel the Love Tonight was stunning performed on ice, as was the tween favourite anthem Let it Go.

There is a good sized interval where you can stock up on shiny things and popcorn. We found the candy floss the best value at £8 as it is a big bag and you also got a cute set of Mickey ears to wear.

Our twin Donald Duck toys enjoyed the show but thought that it needed more appearances from Donald and Daisy.

We particularly enjoyed the second half of the show. The Little Mermaid works so well on ice. I think it is the fact the skaters move so smoothly it does look like they are underwater. The costumes in this section are amazing. we loved how cute little Flounder looked. The set piece for Under the Sea was truly spectacular. I particularly liked the starfish who were so cute and cuddly. Giant Ursula and her minions were enjoyably scary.

Of course, the finale of the show was the part most of the audience were waiting for. No matter how many times you have watched Frozen it is still really magical to see it performed on ice. The costumes are perfect and seemed super sparkly this year. I think the costume department must have ordered extra sequins. The actors play the familiar characters perfectly. Anna is adorably ditsy and Elsa’s transformation into full-on snow queen is just perfect. Olaf always gets the biggest cheer and he is just adorable on ice.

Frozen is the perfect end to a wonderful show. This was such a brilliant show with something for everyone. The audience belted out every word of every song and we left feeling totally uplifted.