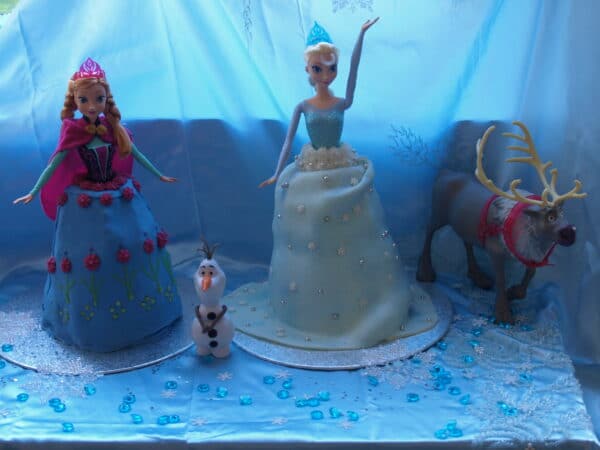 There was only one choice for birthday cakes for the twins this year: they had to be Frozen! Like most of the world, Frozen has taken over the house. A car journey is not complete without a rendition of “Let it go!” I’ve seen lots of great Disney Frozen birthday cakes recipes and have been pinning them to my Disney Frozen Party Pinterest board. However, they all seem to have been professionally iced.

I am in no way a professional and only bake cakes for birthdays and Christmas. But I had to find a way to make these cakes as easily as possible. I think this is totally a cake you can make at home – the fact the dolls are in the middle makes them look amazing even if you aren’t that great at icing (don’t look too closely at the row of flowers on Anna’s dress! ahem…

I found this great cake recipe at Debbie Brown Cakes which has a recipe for a cake which is moist but fairly dense. So it’s ideal for holding its shape when you’re carving it.

Oh and you’ll need some willing doll’s to model the cake bases!

How To Make The Disney Frozen Birthday Cakes

I used 4 pudding basins to bake the cakes. This makes a round cake which is perfect dress shape. I stacked the two cakes on top of each other and then carved the top one with a sharp knife so that it is the same size.

Then I carved a barbie sized hole in the centre of both cakes and stuck them together with some icing.

I used ready made icing and rolled it flat to form the dresses. I rolled glitter, silver balls and snowflake sprinkles into the light blue icing for Elsa’s dress. This created a really lovely effect and I wish I had done it for Anna’s dress too.

Putting the icing onto the cake is quite hard but it doesn’t have to be really flat as the folds look more like fabric. If you had two people to hold each side then it would be a bit easier.

I kept the decoration really simple and used a bit of icing and some sprinkles to copy the dresses from the movie. As you can see from the close up the icing is a bit wonky but the over all effect looks fine. Then I put some icing flowers on the top of the dress to hide the join.

Here are the finished cakes:

The cakes are perfect for twins as they get one each. I staged it by adding a few Frozen toys and lots of gems and snowflake sprinkles with a blue fabric background and some Christmas decorations strung up.

The twins were so excited when they saw it. Their reaction was worth the effort.

Now I just need to make an Olaf cake for the soon-to-be 7 year old. Any ideas?

For more Disney Frozen fun check out my other posts: