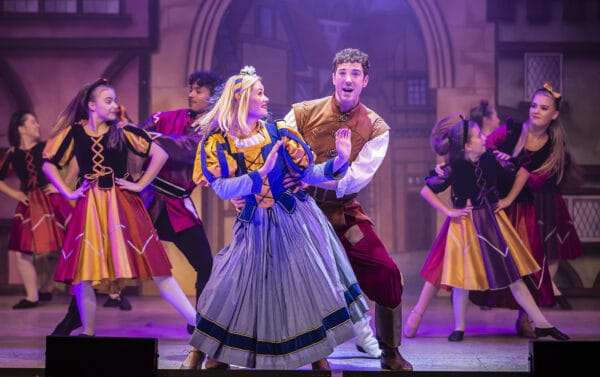 There is nothing more traditional than a Christmas Pantomime. It is such an English tradition, it doesn’t feel quite like Christmas without visiting a show. We had never been to the Lichfield Pantomime before but had heard amazing things about it, so were really excited to visit. We were not disappointed. Dick Whittington had everything you expect from a Pantomime, great laughs, amazing costumes, a dame and an evil villain, a traditional story where good triumphs over evil and loads of audience participation.

The set was incredible, with blue and red shining panels and lots of gold and glitter. We could tell we were in for a treat. There was a puff of smoke and a flash of light and Fairy Bowbells appeared, played by Katrina Bryan from Cbeebies Nina and the Neurons. Katrina really sets the tone for the show, sweet and fun and a little bit cheeky. The cheer from the audience when she comes on stage is genuine.

To balance the sweetness is the Pantomime villain, Queen Rat played with relish by Joanne Heywood. The interaction between these two magical characters is really fun. Queen Rat is a wonderfully over the top character who revels in the booing. Her songs are some of my favourites in the show.

Without doubt, the highlight of the show, and the thing which will get audiences booking for next year is the wonderful performances of Ben Thornton as Billy and Sam Rabone as Dolly the Cook. Their repartee and comic timing are pitch perfect and it really feels like the audience is in on the joke. The entire performance actually feels like a night out with all your funniest friends, it is so warm and inclusive. There are some brilliant jokes, including a whole section of sweet jokes and a slapstick routine on a wobbling boat with lots of custard pies. I particularly liked one routine where children kept asking Dolly for 50p worth of humbugs.

I loved how Dolly kept interrupting the special moments between Dick Whittington and his love interest Alice. This was really funny and livened up the love scenes. Special mention has to go to the incredible costumes, especially Dolly’s hilarious collection of dresses. It was so fun to see what she would wear next. I wasn’t so keen with the two fat jokes later in the play, they felt a little out of place in what is otherwise such a warm family show. We loved the fact there was so much traditional audience participation, there’s nothing better than shouting “He’s behind you!” in your loudest voice.

The songs throughout the show were a lively mix of popular hits including songs from Greatest Showman and a brilliant “It Must be Love” mashup. Rose particularly loved the dancing cat and the special effects which were fantastic.

In the interval, there is time for a break and an opportunity to pick up your 3D glasses. We thought this section was really fun, it is brilliant to see Billy underwater. There are lots of sea creatures attacking and the 3D effect works really well. There were screams from the audience as puffer fish attack and an octopus stretches out his tentacles.

At the end of the show are call outs to the audience, so let the box office know if you are celebrating a special birthday or event. There is also a special moment at the end, where you can take out your phones and snap a picture of the cast. This is such a good idea as you want to capture such an amazing night and you even get the fairy flying.

We left the show buzzing,  and still laughing about some of the jokes, it was a joyful treat. We are already looking forward to next years performance of Cinderella.

Dick Whittington is on until 5th January. Tickets are selling fast so make sure you book soon to avoid disappointment.

Disclaimer: We were given two tickets for the purposes of this review.