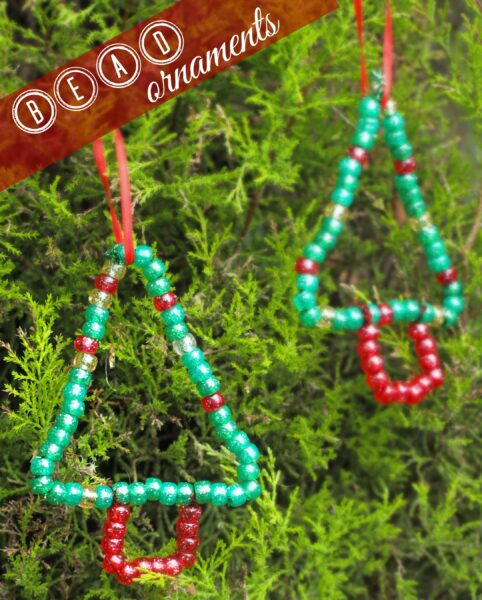 Today we made some bead ornaments for the tree. We haven’t put it up yet it’s still a bit early for me but it is nice to start getting ready and I think we will give some as presents as they turned out really pretty. Let’s get start on these brilliant bead ornaments craft for kids.

Last year we made some ornaments for the tree using beads. They were a little bit fiddly and I wanted the girls to have more input this year and so made the design a bit simpler.

The pipe cleaners are so thick that you can just thread the beads on and they won’t fall off the end. This makes it so easy for little hands. The twins are three and they were able to thread the beads on completely independently. I then made them into the shapes and tied the ends together.

As usual they had very strong ideas for what they wanted to do. Charlotte enjoyed making a tree but that was enough for her and she didn’t want to do any more.

Rose loved this activity but wasn’t very keen on making ornaments at all. She made a heart and a star. Despite me not putting out the pinks she managed to track them down for her heart shape. It actually ended up looking quite festive though. She also hates the idea of giving it to anyone or putting it on the tree. She wanted to carry it around in her bag and play shops instead.

Molly really enjoyed this too. She is six and very keen to do everything on her own. I helped her to make a snowman. Her beads had a very clear pattern. She could make the circles herself but struggled a bit to make the two circles go together. I made the hat for her to go on the top which was a little bit more fiddly.

As I had helped her so much she was very keen to make her own one without me helping at all and came up with her own bauble. It was also her idea to make the star the way we did. I was going to do two triangles and overlap them.

I was really pleased with how all the decorations turned out and I think we will make some more if I get some beads. To hang them I simply added some red ribbon and tied it on the top. The best thing about them is that they catch the lights on the tree so they will really sparkle.