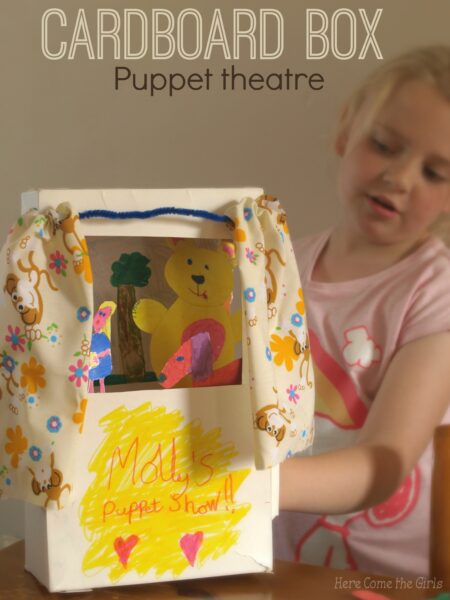 I love a kids activity that they have designed themselves. If they think of a project themselves they get so much more involved and interested in it. A few years ago we made a cardboard box theatre from a large box. The girls all loved it but it was a bit big really. This time they decided to make one from a cereal box.

First we turned the box inside out. Cereal boxes are so hard to paint as they have a shiny surface. To do this, you just need to cut down one side, turn it inside out, then tape together.

We then cut a hole in the middle and one in the side to stick the puppets in. Then we used a pipe cleaner as a curtain rod and some fabric scraps as curtains. The girls needed help with the cutting and a bit of help making the curtains so you could pull them across, but the design was all theirs.

After they had finished, the girls decided they wanted a little puppet theatre too.

They decorated the theatre with felt tip pens and included a backdrop in the back of the box.

Then it was ready for the play.

Next the girls designed their own puppets. They used cardboard, felt tips and drinking straws.

They made a whole variety of different puppets.

They made them in different sizes.

Of course, we had a few Minions too.

When they had finished the girls made tickets and invited the whole family to watch their plays.

If I’m honest, they need to spend a bit more time writing and practising the plays before performing them. Even so, it was a wonderful speaking and listening activity and great for practising story telling.

This is an easy activity to put together and only requires a few things you probably already have at home. The best thing is you can rope your whole family into taking part.

It does provide hours of fun, although the downside is you will have to sit through a few experimental am-dram theatre shows. Be warned you won’t be allowed to leave until they have shown their whole play, probably twice through.