A Weekend at Center Parcs

The girls favourite activity at the moment is without question “Let’s Go to Center Parcs”. They have been playing this since last Christmas ever since we went on a fantastic weekend break at the holiday park. It made a big impression. Usually they play it by putting out the chairs to be a car and carrying on from there but I thought it would be nice if we created a Center Parcs small world for them to use with their toys.

Center Parcs is in the woods so we needed lots of cardboard tubes and scrunched paper to make trees. The base of the small world is a cardboard box which we have covered with paper and craft foam. To give it an added bit of realism we printed off some of our photos from our trip for the background and the buildings and signs.

The small world is about the length of the radiator. We used a map from the holiday to make it although we didn’t follow the map exactly.

The paths and bushes are scrunched up tissue paper. There are also some flowers which are the toppers for birthday cards.

We have used Happy Land and Playmobil people to populate our small world but any small characters would work.

There are lots of animals at Center Parcs so we used our Schelich animal collection for ducks and rabbits as well as a shy fox hiding behind the trees.

The roads are really simple. Just strips from the back of a cereal box with dashed lines drawn on them. There are a large variety of cars in the car park, including the racers from Wreck it Ralph.

The swimming pool is made from a box for a salad and a box for grapes.

The restaurant and coffee shop are photos printed off and stuck onto cardboard boxes.

The twins have really enjoyed playing with the small world. they are three and love games like this. Molly, who is six, enjoyed making the world with me for her sisters but hasn’t really played with it. I think she might have moved away from this stage. She did like helping to make the stop motion video and adding the voices, though.

I like the way games like this adapt and change. It looks like Peppa Pig has come for a day trip to Center Parcs. I’m not sure what the giant shoe is doing in the background though! 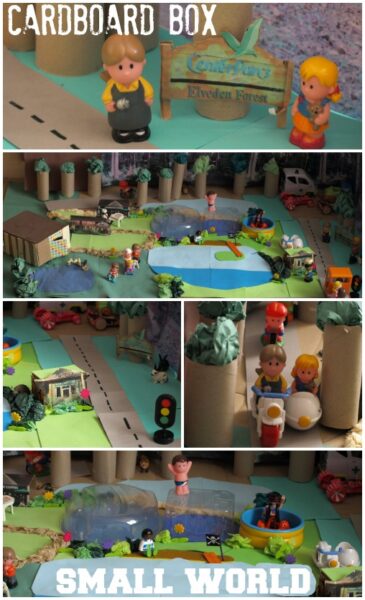 Although our small world is based around our holiday you could do this for anywhere. A real map of our hometown would be nice, with a real house and school which look like their own places.

If you love making things out of cardboard then make sure you check out my epic series of posts on cardboard creations for every letter of the alphabet.

Don’t forget to follow me on Facebook or get free updates by subscribing to my RSS feed to get all updates.I also have a jam-packed Pinterest board called Cardboard Creations so make sure you are following that as I will add to it over the year. 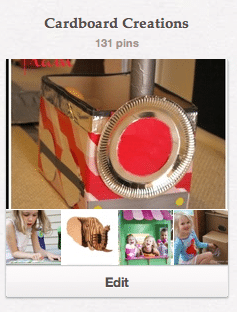