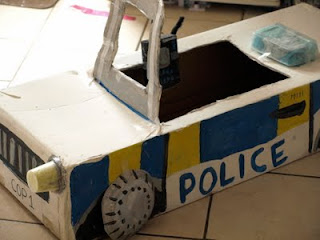 The cardboard box which our latest pram came in has been sitting in the kitchen for over a month. The children have had so much fun jumping on it and hiding inside, but this week it was finally time to do something with it. I asked my daughter what she wanted to make with it and she decided on a police car.

We looked at a few photos on the internet and she came up with lots of ideas how we could turn it into a car. These mainly involved her having a good idea to stick balls to the car as these were the main things she could see.

I cut a window in the box. It would have been easier with a craft knife but I couldn’t find one so scissors had to do. When the twins were in bed we painted the box so it looked like a police car. There was a little bit of incidental colour mixing when we ended up with green in the middle of the yellow and blue.

The radio was made with a small box. We stuck on numbers and a thick pipe cleaner.

The blue lights were made with a take away box filled with tissue paper.

This worked for the lights as well – this time using a jelly pot. Again a knife would have been useful as I couldn’t cut through the thick double layer of card and set the lights further back. The wheels were paper plates.

Once the paint had dried it was finally play time.

How to Make a Cardboard Box Wardrobe for 18 inch dolls