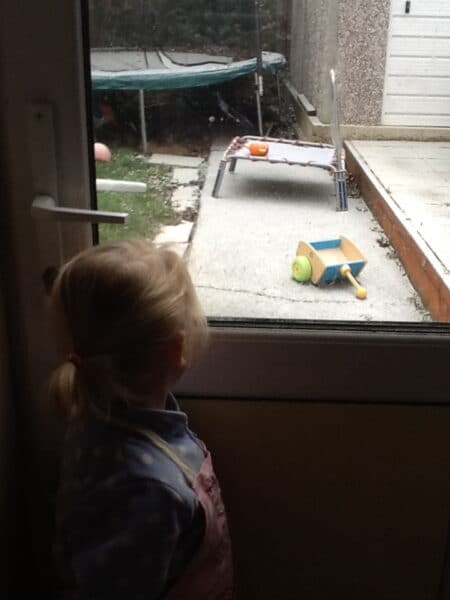 Downstairs I hear a knock on the door. It’s always when I’m in the middle of something. This time the twins had noticed my attention wandering and made a run for it, through the open stair gate left by their big sister, and up the stairs. They are amazingly quick when they’re up to no good. Quick and silent, like the best predators. By the time I’ve chased them they have already stalked their prey and are poised for the kill. One has unravelled the toilet paper and the other has an open tube of toothpaste ready to squirt on her sister’s head.

Of course that is the moment I hear the knock on the door. I know who it’ll be, so I don’t rush. It’s the little girl from two doors down asking if M wants to play outside. She comes every couple of weeks and I give her some excuse or other. “Can M come out to play?” For me it’s an easy answer. No she can’t. She only four, for goodness sake.

There was a Facebook status doing the rounds a little while ago which you might have seen. It said something like “Who remembers the good old days of children being able to play outside with their friends, getting a smack when they did something naughty, blah blah blah.” I didn’t press ‘like’, although I’m not condemning anyone who did, everyone is different, after all. It’s just that wasn’t my childhood. I didn’t get smacked when I was naughty (I’m not going into that one today – another time perhaps) and I never played outside on my own. The playing outside is the thing which is always held up to be the ideal, a bucolic time where children had so much freedom they could wander the streets and not come home until tea time.

I don’t know, for me it doesn’t sound so wonderful. Children need lots of fresh air and exercise. I certainly had that. We walked everywhere, having no car while my Dad was away at sea. We took part in lots of outdoor clubs and spent lots of time at the beach or in the park. It was a wonderful time. But my family was always there.

Did I miss out?

I remember a few times going to the park with my friends when I stayed at their house towards the end of Junior school. Once we were chased by some older boys and called names. I went home in tears. Of course this doesn’t always happen, but children can be pretty cruel. When those people who go on about how wonderful it was to roam the streets go a little deeper there is usually some story of bullying or vandalism, steeling apples or sweets or worse.

I’m talking young children here I suppose. As they approach the end of Primary school children do need some freedom. They need to be able to get to and from school and go on buses and generally be a bit streetwise to be able to cope with Secondary School. They do not need to be left for hours unsupervised, I think that’s very different.

My biggest concern though is the road. Every day I get frustrated that the children on our street play in the road. We live in a cul-de-sac but it isn’t quiet. Cars speed around the corner and don’t expect a load of kids to be playing out. I saw a little girl of about five run out and narrowly avoid getting hit the other day. On the road down from us is a tree which is covered in ribbons as a permanent reminder of one boy who was not so lucky. The thing is we live next to a park. If the parents could spare half an hour they could take their children there and sit and watch them playing. Wouldn’t that be safer?

So no, M is not going out to play. Am I being over-cautious?