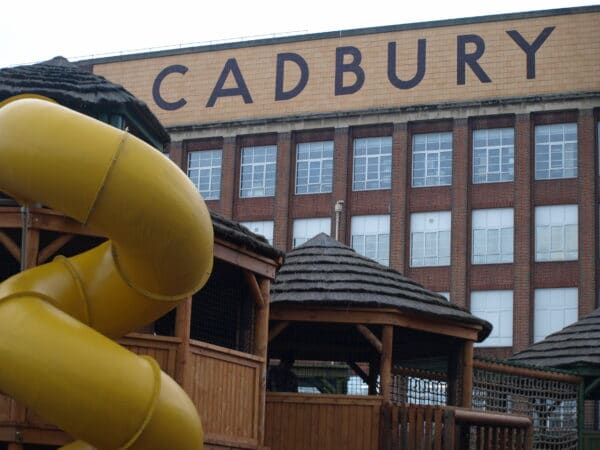 When my lovely blogging friend Emma from Mummy Mummy Mum and Science Sparks asked if I wanted tickets to go to Cadbury World I didn’t have to think about it for very long. Of course no one wants to spend the afternoon sampling different types of chocolate  but if it helps out a friend, well of course I will. When I told the girls they all protested and said they would much rather stay at home and do lots of homework and help me with the housework.

OK I’m lying – as soon as I mentioned chocolate factories they started to jump around with glee. Molly is the only one of us who has been there before and her exact words were “it’s the best place in the world”. She went about eighteen months ago and was very keen to write her name in chocolate again and go down the big yellow slide.

The trip was to mark the launch of the incredibly tasty new treat called cadbury’s Pebbles. These are like delicious large Smarties and really do fit their tag “Joy for All”.

We live very near to Cadbury World but I have never been before. Other than eating lots of chocolate I wasn’t really sure what to expect.

I have to say I used the trip as a bribery tool all well and because the girls had slept in their beds all night for the first time in ages they had some pocket money and were keen to spend it. Our first part of the trip was a visit to the largest cadbury chocolate shop in the world. I was a bit nervous as shops like that are usually really expensive but they all picked up a little teddy and for once it was actually the price of their pocket money.

Rose was very excited to find a giant R for Rose to stand next to. She also liked being a Freddo frog.

The girls really enjoyed the factory tour. We were handed lots of chocolate as we entered and still had some left at the end. Some parts are real bits of the factory and others more like a funfair. It was a nice mix. It was interesting to see how chocolate came to Britain and was developed by Mr Cadbury. Some of the special effects were really good – especially the 3D experience where you are jogged about like a cocoa bean. There were a few people dressed in costume and I think it would have been better if they had been more a part of the experience. There were a lot of movies in each stage and I would have been more interested if a real person had been there acting it out, instead.

The girls liked the ride the best of all. You go in cars and see lots of little cocoa beans having fun and can get your picture taken.

We also spent an incredibly long time in one part of the factory with mirrored walls where you can jump on little chocolates and unwrap them. The girls all adored this. I had to literally drag them away.

The part I liked the best was the bit which seemed most like the real factory. You got to see how chocolate is made, packaged and decorated. Molly enjoyed writing her name in the chocolate and as you can see in the picture, tasting some. There were little pots of melted chocolate given out at a couple of points and I really needed to have brought wipes as they all ended up covered.

There were lots of examples of chocolate art – including this lovely chocolate crib made for the royal baby.

The twins liked the chocolate Cinderella slippers and these amazing pumpkins.

After the tour we spent a long time in the playground. I really didn’t think whizzing around in a basket was a good idea after all that chocolate

There was a lot more to do at Cadbury World than I expected. We were there from 1.30 to about 5.30 and there were a few things we didn’t fit in. A family ticket of 2 adults and 2 children is £45.80 which I think is a fair price really. The thing I was most impressed with was that under 4’s are free. They still got a ticket though and could have the same chocolates so weren’t left out. So many places you have to pay for young children.

Cadbury World is a fun place to visit if you are near. There is a lot of walking though, and I did struggle a bit with the twins on the stairs. There also seemed to be a lot of queues. You had to queue to get ticket and then to get to the show and then for the ride inside. Luckily the bribe of chocolate was enough to keep the girls waiting happily and the queues moved quickly but I know on another day this would have been a bit much for three year olds.

We left the factory burdened down with chocolate. Each person gets a Crunchie, Wispa and dairy Milk. Yum.

Disclaimer: I was sent a family ticket for the purposes of this review.