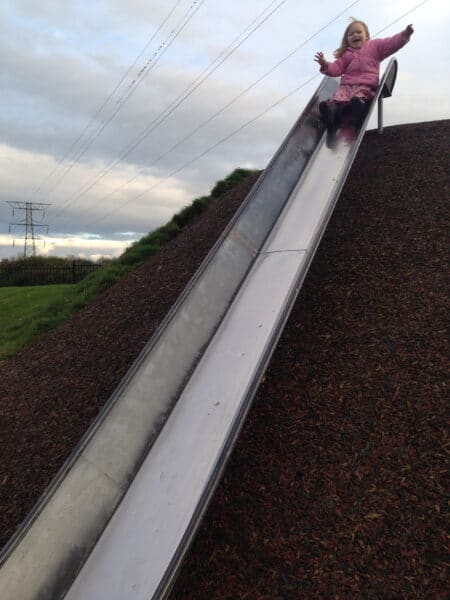 One of the hardest things for me, parenting twins, has been getting outside. I am a big believer that children need to get outside as much as possible. The need fresh air and exercise and a bowl of water when they get home, well the last bit might be puppies – I always get them confused! So for the last three years whenever I could I have taken the girls out for a walk. Well that has been the theory.

Sadly, most trips have ended in tears – usually mine. Every time we headead out one of the twins would fall over, or refuse to walk or they would go in the wrong direction. Often I would end up trying to carry both of them home, trailing Molly behind us. Usually I am carrying a heavy bag and assorted play equipment. It has rarely felt fun. Having more adults with us helps but still tends up with arguments and headaches.

Gradually, gradually things have been getting easier. I have slowed down a lot and realised that I can’t do it all. Short trips are better and taking less things helps. Also going when no one is especially hungry or tired helps.

Then yesterday there was suddenly a huge change. I have been taking it one step at a time with the twins and didn’t realise that we were actually getting somewhere. Yesterday at the park the twins were both happy. Neither cried because it was windy. Then suddenly they decided to go on the big slide. I know lots of 2 year olds will climb up high slides but mine have long been the most scaredy of scaredy cats. Even coming down the stairs has been a problem. After a bit of initial nervousness they were off. They climbed the steps themselves – not with great confidence yet – slowly and carefully, taking a step at a time – but they did it.

There are two slides at the park – one considerably bigger than the other. At first they would only go on the smaller one. Then a little girl ran past them, she was probably only eighteen months old. I saw them watching her and saying that babies couldn’t go on the big slide. But she did. After that they both wanted to try it.

The first go they looked scared but then they didn’t want to leave. The only problem is I am used to very short trips to the park. If they are going to enjoy themselves and want to stay at the park for hours then I need to get myself a warm winter jacket. And some gloves. And a hat. And maybe a newspaper to read.

It will be worth it. To see my scaredy-cat daughters on the highest of high slides feels like a very big step indeed.

Disclaimer: In partnership with New Look