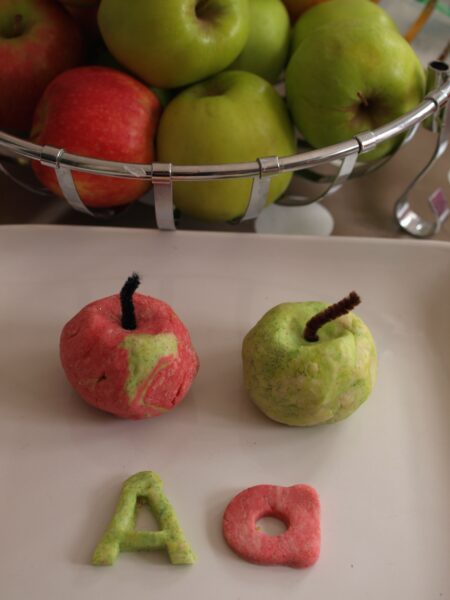 The twins start school in September. It doesn’t seem very long away and so I’m trying to prepare them with some fun activities. I thought it would be a good idea to work on phonics with some alphabet play dough. We have started with a for apple. So we made apple play dough. I was amazed how keen they were to play with this.

We made two colours of play dough – red and green using red and green food colouring and glitter. We also added a few drops of apple washing up liquid to give it an apple scent. It made the dough a bit stickier than normal so we added a bit more flour.

I set out some alphabet cutters and some pipe cleaners for the stalks – although I think real twigs would have been better.

The girls made some apples and it was really good fine motor practice as well as they had to roll lots of balls. Then they found some ponies in the play dough box and decided the ponies would like to eat some of the apples.

We made this into a counting game using the number cutters and made apples to match.

Of course the twins also had to make clothes for their ponies. They were given some rather lovely play dough hats. What i loved most about this activity was that the twins didn’t even notice the learning element – they just incorporated the letters and numbers into their play naturally.