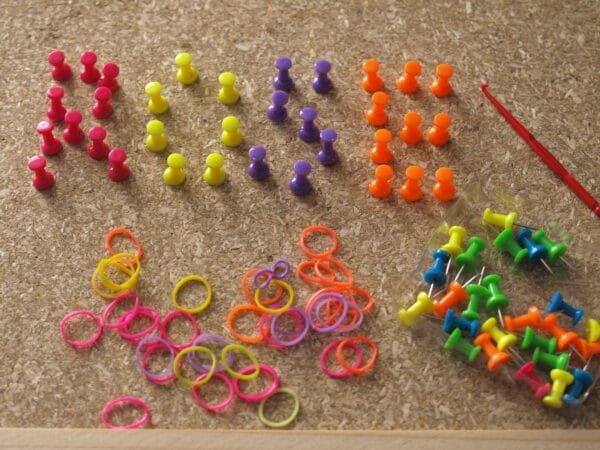 Are your kids sick of loom bands? Nope not mine either. I have to say it is a good craze though, even if I do spend my life hoovering up the things. It is so creative and great for boys and girls. The only group which seems unable to take part in the craze is the little ones. The twins really really want to be able to do loom bands, but at 4 years old they are just too little. But I thought of a couple of Alternative Loom Band Ideas for preschoolers which would be fun and have a sneaky bit of learning involved too.

I thought the bands would work really well with a pin board. I used a cork board, some colourful pins and some loom bands to make an activity for the twins. I spelt out their names in different letters using the pins and then they put the loom bands in between. This was great for fine motor skills as well as for letter and name recognition.

Older children could make their name with the pins first. The twins found this a bit hard though.

The did enjoy stretching the bands in between the pins.

This looked great and would actually make a really cute sign for their door.

You could spell out key words or just practice letters.

This idea was 100% Rose’s creation. She has been desperate to use loom bands since the craze started. She took the bands and stretched them over lego duplo. It actually forms a mini geo board.

Just like a geo board you can make shapes using the bands. It is great maths practice. Rose likes using a loom band hook as it feels more like a real loom band.

This is such a great idea. I kind of wish I had come up with it myself. The only problem is I just had to spend ten minutes taking the loom bands off the lego.

This idea is a combination of the previous two. I used the pins to make a geo board and the girls made shapes using black and white bands.

The bands are the perfect size for this and also so much more colourful than normal bands.