Based on The Alphabet Tree by Leo Leonni

I chose the Alphabet Tree to read with the girls because they are just starting to recognise a few letters from their name. I think having twins means they are really interested in how their names are different it has definitely sparked their interest in letters. They are noticing the letters around them and looking for words with their name letters in them.

The book describes how there are letters in each leaf and how they start to form words, then phrases and finally sentences. It is great for older children to show the difference between each.

I made a tree shape using a piece of card from the inside of a roll of wrapping paper and stuck it to the wall. I made sure there were enough branches for each letter.  The leaves are actually leaf shaped post it notes which I wrote each letter of the girls’ names on. The twins over sticking their name onto the tree. It was a really visual way to see their names. They noticed that Charlotte’s name is much bigger than Rose’s. They could both find the initial letter of their name and each other’s. Charlotte also spotted that the r in her name was the start of Rose’s. They were really motivated to learn the sound to go with each letter.

I always start with the phonic sound rather than the letter name as this is the best way to learn to read. Of course this is hard with a name like Charlotte as the initial sound is so irregular but this is something she will learn as she goes along with more repetition. I will keep this up for a couple of days and hopefully they will start to recognise a few more letters.

After they had made their names Rose was very keen to write her name on a leaf. I was really pleased as she is usually a bit reluctant to write or draw. She is not yet three so her marks were just little scribbles but she was definitely understanding that she could write her name herself. She made a scribble that looked very like a C and was very excited to show Charlotte that she made a C from her name.

Of course I would have preferred her to use a pencil and not pick up the permanent marker I had been using. Thank goodness she chose not to draw on the freshly painted walls. I got a few more grey hairs from that! It’s definitely reminded me not to leave pens around. 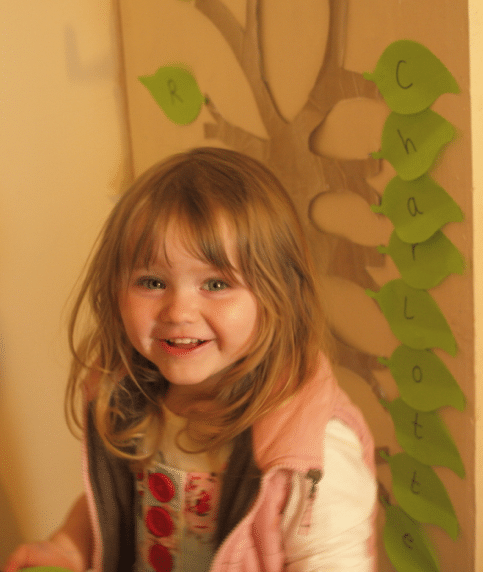