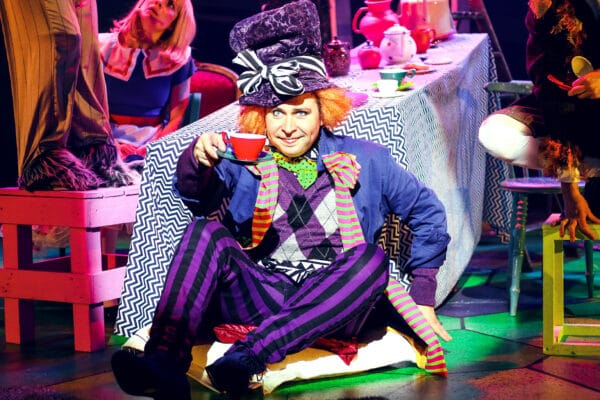 We were really excited to be invited to see Alice in Wonderland at The Old Rep Theatre in Birmingham on Saturday. It was a lovely treat to take Molly out for a Christmas treat. We knew a little bit what to expect because the twins had been to see the show the day before on their school trip. Their review was very positive but not very helpful as it mainly focused on who got to sit next to whom on the coaches and when they had been allowed to eat their snack. They did say it was very funny and the Mad hatter was a little scary. I guess I need to stick to writing the reviews for a while.

The Old Rep is really easy to get to in the centre of Birmingham. Whenever we visit it always feels like lots of thought has gone into the whole experience to make it as fun as possible. There were a couple of places where you could take a selfie. Molly loved taking a selfie as the Queen of Hearts photo board, so clever. We were treated to a delicious afternoon tea before the show and some crafts for the kids, as well as a bookmark and playing card with our tickets. So thoughtful.

I also wanted to show you the program. I have stopped buying programs as they can be really expensive but I would really recommend the program for Alice in Wonderland. It only costs £4 but is packed full of activities and puzzles to do. This is a great way to extend the fun of a trip to the theatre and to keep children busy if they get a bit restive during the interval. You can even buy packs of colouring pencils if you don’t have any.

We couldn’t wait for the show to start. The White Rabbit made an appearance before curtain up and stopped to chat to the audience, although he was very worried he was going to be late. 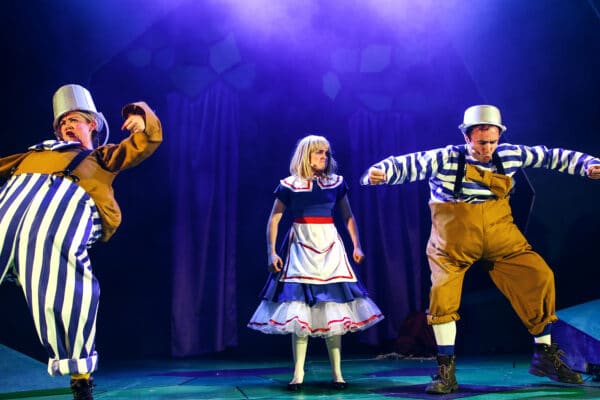 The show was brilliant: whimsical and colourful with plenty of laughs. The plot stays true to the Lewis Carroll original but has several new elements which make it seem fresh and exciting. Alice, played by Grace Dean is a delight, so energetic and gregarious. She takes you into this magical world of Wonderland and shows how delightful it is.

Alec Fellows-Bennett is hilarious as The Mad Hatter. A word of warning – the songs written by composer Steve Allen Jones are incredibly catchy! I was singing them all the way home, especially the Mad Hatter’s song. 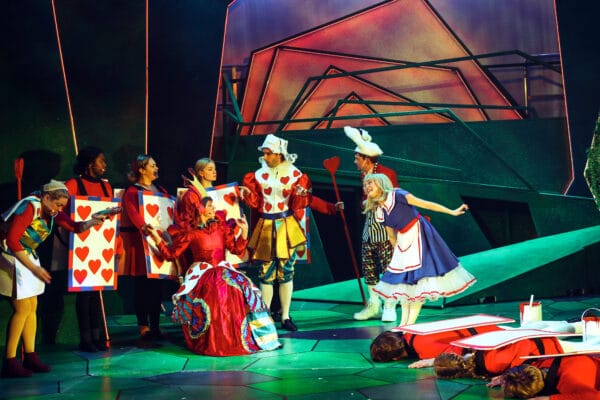 The staging is very clever, with a combination of puppets, lights and special effects. I did wonder how they would get a giant Alice on stage! There is a clever mix of on-stage special effects and lights which make the fall into the rabbit hole really believable and impressive. We loved the puppets, especially the two cats, Dinah at the beginning and The Cheshire Cat who was so much fun.

The entire ensemble worked incredibly hard with several parts and the corresponding costume changes each.

After the show, we were really lucky to be invited to meet the cast. We were a little worried we’d upset the Queen of Hearts and she would shout “Off with their heads!”

We did a chest bump with Tweedle Dum. Or is it Tweedle Dee?

I tried to get the Mad Hatter to record a message for the twins in his mad hatter voice. I think a clip of him saying “Tidy your room!” or “Do your Homework!” would be really effective. He thought he might market an app. I’d definitely buy it.

We left the theatre feeling totally uplifted, singing the songs. The final words of the show are definitely true “A Little Piece of Wonderland always stays with you.”