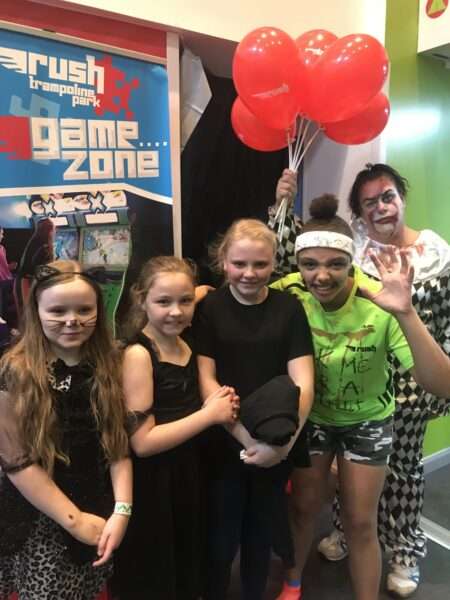 Now the girls are getting older, the usual Halloween activities just don’t seem to cut it. So they were all really excited to be invited to the review the Zombie Takeover at Rush Trampoline Park in Birmingham. This is such a fun event, perfect for older children who want lots of fun and to be a little scared. We have visited Rush Trampoline Park several times before and always had a great time.

When you visit Rush, it is worth getting there early so you can sign the waiver, watch the safety video, and of course put on your Rush socks. There are handy lockers which are free to use, you just have to put in a code.

When we arrived, everything was decorated with spooky decorations ready for the Zombie takeover. There was a barricade of shopping trollies barring the way and a very scary clown, holding a red balloon, waiting to greet us. Even the staff at the safety briefing were dressed in costume.

As we entered the trampoline park all the lights were switched off, leaving everything to glow with a spooky UV light. It would be worth wearing white clothes or makeup so that it glows in the dark. It was still light enough to see what you are doing so it is perfectly safe, it just made it more fun having a spooky atmosphere. The only problem for me was that I had only brought my phone so my photos didn’t look great in the dark!

There are so many things to do at Rush and we were definitely kept busy for the hour we were there. In fact, an hour didn’t seem long enough. There are so many different trampolines, including, slopes, long trampolines and wavy trampolines. There are several large platforms for you to jump off. The girls also enjoyed walking along the trapeze line, like they are at a circus.

Trampoline parks are fantastic for encouraging you to face your fears and really challenge yourselves. One of the twins is terrified of heights, but every time we visit, she really pushes herself to go a little higher.

She didn’t quite make it up the platform this time, but she did do a front flip off the lower platform which was a great achievement. It is wonderful to see them growing in confidence.

A the end of the session we paused for a photo with one of the zombie scream crew. They were running around the trampoline park with water pistols, jumping out at everyone to make them scream. No one noticed the zombie clown photo bombing in the background!

We all had a brilliant time at the Zombie Takeover. It was a really fun start to the holidays and a great way to celebrate Halloween. I would definitely recommend going for the earlier time with younger children as it was a really nice atmosphere, and not too scary, the teenagers would choose the later session. The girls have already said they want to go again next year and I think it will become a great Halloween tradition.

Disclaimer: We were given tickets to the event for the purposes of this review.