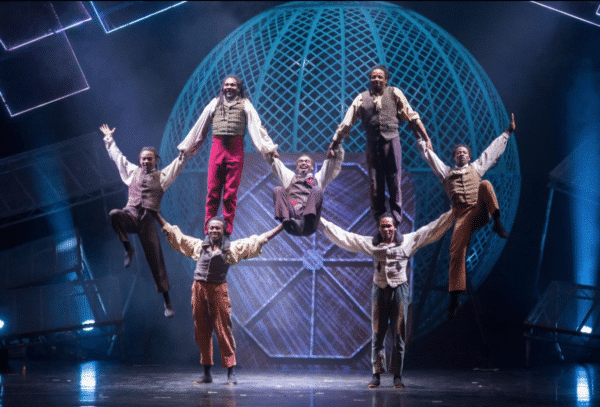 It really has been a miserable Half Term with rain and winds every day. Luckily Cirque Berserk has come to The Rep Birmingham and this show is guaranteed to cheer up even the gloomiest of days. We were invited to the opening night of the UK tour and it really was just the tonic we needed to brighten up our day.

We were really intrigued to see a circus performance at the theatre and wondered whether it would have the same atmosphere. We needn’t have worried. You get all the warmth and comfort of the theatre with the thrill and excitement you would expect. The staging of the show makes it feels like you are outside the circus tent with the performers getting ready and messing about and teasing each other. It adds a real warmth and charm to the show.

The girls were really pleased when the announcer told us not to put away our phones and to take as many photos as we like. A real gift for a blogger! Cirque Berserk has a large company of performers and every night there is a different variation so you may not get to see the same as us.The performers come from all over the world and their costumes reflect the region they come from with an old school glamour which harks back to the roots of circus performance.

The performance starts with the Timbuktu Tumblers an acrobatic troop who jump through hoops, balance on each other’s backs and even limbo under fire lit plus. They bring so much energy and fun to the stage and their tricks are inventive and full of humour. We were delighted whenever they tumbled on stage.

There are some incredible tricks and stunts in the show. What makes them even more thrilling is that they are performed without any safety devices at all. The performance is highly polished and there is a real precision to the tricks. It’s hard to choose a favourite trick as they were all so spectacular. We loved the beauty and elegance of the aerial ballerinas and the incredible routine from Elberel from Mongolia who appears on stage in a bottle and fires arrows with her feet. Our absolute favourite were the troop who used a see saw to throw their performers across the stage to dazzling heights.

The warm heart of the show is the comic acrobat Paulo Dos Santos. He appears at different times throughout the show and at first his comedic routine of slapstick falls feels very familiar. However there is a touching pathos to his storytelling as he first appears as a put upon caretaker, picked on by the performers who dreams of performing while keeping the circus tidy and fix the lights when they blow. When he finally gets his moment to shine, his acrobatic skill lights up the stage and puts a smile on everyone’s face.

The big trick of the night is the Motorcycle Globe of Death. I really can’t believe how the Lucius Team are able to carry this hair-raising trick on on stage. The performers use centrifugal force to spin around the globe and create a stunning light show while they do it. The kids couldn’t believe it as more and more motorbikes drove into the globe. The look on their faces was priceless.

We left Cirque Berserk on a real high. It is a unique show packed full of thrills and laughter which will delight the whole family.

Disclaimer: We were given a family ticket to see the show for the purposes of this review.