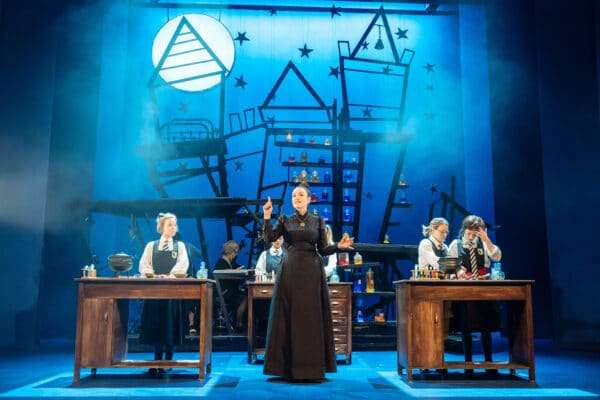 When we saw The Worst Witch was coming to The Birmingham Hippodrome we were so excited. The books by Jill Murphy were my absolute favourite growing up and I’ve loved sharing them with my girls. It is the perfect mix of magic and mischief and there is something really special about the characters of Miss Cackle’s Academy. We were thrilled to be sent tickets for the press show last night and it didn’t disappoint.

Our seats were in the right stalls which turned out to be the perfect place for this show. When we took our seats the characters through a door next to us and started walking through the audience. The characters were instantly recognisable. Ethel Hallow walked through the audience like she owned the place, Miss Bat was drinking a cup of tea and Mildred Hubble awkwardly climbed across the seats in the row in front of us.

The Worst Witch is a play within a play. The girls are in their final year and are putting on Mildred’s play about her time in the academy. Mildred played by Danielle Bird is perfect as the adorable clutz who just wants to fit in and who finds herself learning magic by accident. My favourite line comes at the start of the show. Miss Cackle is handing out the sashes for the houses and Mildred asks, “Which is the evil house?” Miss Cackle answers, “We don’t have an evil house that’d be silly.”

“We don’t have an evil house that’d be silly.” Miss Cackle

I love the quick transitions as Mildred settles into her new life and we see the girls dancing through their first lessons. The songs have an edgy rock twist and are really catchy, the instruments are played by the characters. The relationship between Mildred and Maud is really sweet. We all thought the cats were adorable, especially Mildred’s cat Tabby. They are brought to life by simple but clever puppetry. I love the fact that you can learn how to make your own cat puppet in the programme.

The story would not be complete without Ethel Hallow and she is played beautifully by Rosie Abraham. Every movement she makes is obnoxious. Her physical performance is hilarious, especially when she is transformed into various animals. I’ve always had a soft spot for the character of Miss Hardbroom. Rachel Heaton brilliant as teacher. I’d have liked to have seen even more of her. Things are going well until rebellious Enid Knightshade arrives and gets Mildred into trouble and comes between her and Maud.

The best scene of the show is the broomstick display on Halloween. With Mildred and her friends, this can only be a disaster. The acrobatic stunts from Maud and Mildred on their broomsticks were incredible.

The second half of the show is a bit darker and moves away from the plot of the books adding its own twist. Miss Cackle’s evil twin Agatha is brilliantly over the top villain with a penchant for musical dance numbers. She was so believable that when she stormed into the audience Charlotte had to come and sit on my lap. The play is suitable for ages 7+

This is a magical family show, a must for children who love stories of magical, adventure and friendship. It had us laughing and dancing along. We all loved it and the girls say it’s one of their favourite shows of all time. You can watch The Hippodrome until Sunday 26th May. Tickets start from £17.

Disclaimer: We were given tickets to the press night of the show.