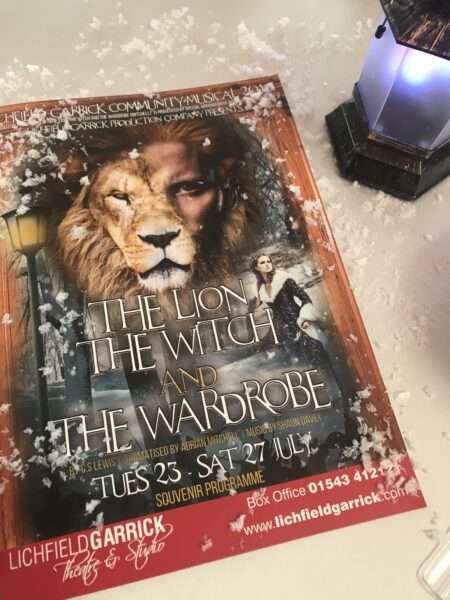 Last night we were transported to Narnia to see a wonderful community production of The Lion the Witch and the Wardrobe at the Lichfield Garrick. The series by CS Lewis is such a classic story and I was intrigued how it would be brought to life on stage. We have visited the theatre a couple of times to see the annual pantomime, which is a real treat. This year’s pantomime is Cinderella, starring Rebecca Keatley from Cbeebies I love the ethics behind the theatre, which strives to do something new and different with each production and which puts the community at its heart.

The show started with a short version of The Magician’s Nephew by the Upstagers, an Integrated Performing Arts Group which meets at the Garrick. It was a wonderful opportunity for the actors and the joy they had from performing on the stage was lovely to see. The actors had worked hard on their parts and delivered their lines with enthusiasm, and it was interesting seeing the first story in the Narnia series as I’ve never read that book.

There was something really magical about this performance of The Lion the Witch and The Wardrobe. The staging was simple but used effectively to create both the real world and Narnia. The story starts with the children getting on the train to be evacuated. They use suitcases which light up to great effect to be the carriages on the train.

I particularly liked how Mr Tumnus’ house folded out from under the stairs. The wardrobe was used as a brilliant device for transporting the children to the other world, and there was something quite otherworldly about the two characters who moved the wardrobe. When Lucy steps into Narnia for the first time actual snow fell on stage and in the audience. It was so lovely, especially in the middle of a heatwave.

The actors in the show really brought the story to life and there is some great talent in the cast, with a few young actors I’ll definitely be looking out for in the future. Molly Summers was sweet and soulful as Lucy. Edmund played by Ben Ogden was as annoying and petulant as you would hope. Flighty Mr Tumnus and Mr and Mrs Beaver were earnest and adorable. Susan and Peter were the balancing force trying to keep everything together. The White Witch, performed by Ellicia Smith was brilliantly icy. The part where she calls all her minions to the stone table and sets upon Aslan was atmospheric and creepy. The real fire used in the torches made an excellent contrast to the snow.

It is Aslan played with gravitas by Nick Baker who really stole the show. His solemnity and stillness gave the impression of great emotion and intelligence. It was a good decision to not give the animal characters masks, as it allowed them more expression and actually made them seem more real.

We had a wonderful time at The Lion the Witch and The Wardrobe. I went away singing the final song, which was definitely my favourite from the show.

Disclaimer: We were given a pair of tickets for the purposes of this review.