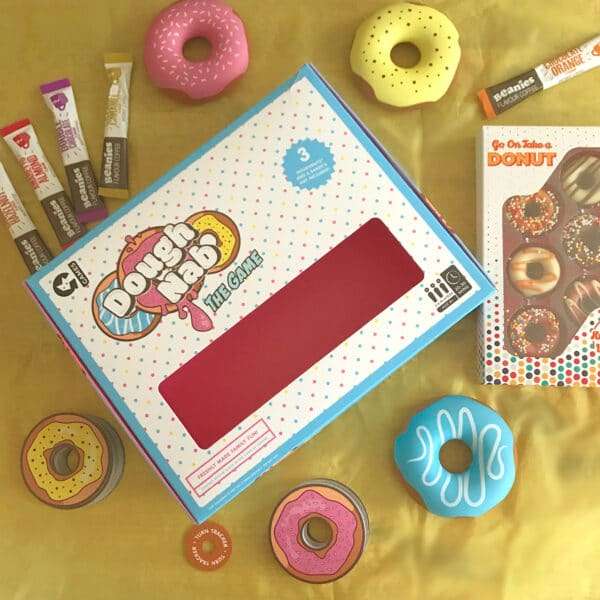 When we saw this cute new game called Doughnab from Ginger Fox I knew we had to try it. The twins love doughnuts, they are such a fun, colourful treat and the game is just the same. The packaging looks just like a tempting box of doughnuts. Costing £20 – this would make a really fun present for a family.

Dough Nab The Game is recommended for players aged 8+ and is suitable for 3-6 players.

In the box you get three colourful pretend donuts, game cards, a turn taker disk and a dough Nab chef hat for the winner. The game is simple to set up although the rules were a bit more complicated than I expected. I hate reading rules and I had to go over them a couple of times to make sure I was getting it right. It is based on snap and you have to use up all your cards to be the winner and be crowned head baker.

This game really encourages you to stay alert as you have to watch out for three of the same doughnut and then nab it. If you get the wrong doughnut you can end up with everyone else’s used cards which means you’ll really struggle to win. It’s definitely harder than it looks! There are also a couple of special cards in the pile, magic doughnut cards and crumbs cards which add an extra fun element to the play.

This game is definitely more suited to over eights. The game is really fast paced and fun and a little bit different. We will definitely be looking out for more Ginger Fox games in the future.

Dough Nab is available to buy from Debenhams

Disclaimer: We were sent the game and some donut goodies for the purposes of this review.