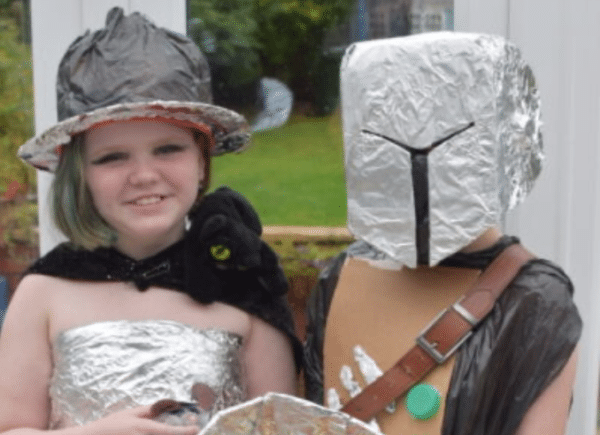 Halloween this year was certainly different. The girls were a bit disappointed when I said we wouldn’t be able to go and trick or treat this year. So we decided to think of lots of fun ways to celebrate at home instead. We were contacted by Freeze Debt to take part in their DIY Mandalorian Halloween Costume challenge. The challenge was to make costumes using only things you could find around the house. By doing this Halloween challenge Freeze Debt wanted to promote staying in and staying safe this Halloween, while having fun and also saving money. They want to celebrate family time and show how staying in can be beneficial for both the family and finances.

We thought this was a brilliant first challenge for our Halloween day of fun. The twins were really excited and spent ages planning what they were going to make. They collected lots of different household items, bin bags, boxes, bottle tops and tin foil. They put on old clothes for under their costume.

Charlotte wanted to make a Mandalorian costume as she loves baby Yoda. She spent hours drawing her costume and had lots of good ideas for how to put it together. She used a black bin bag for the main part of the costume. She tied two belts around it. She used a piece of card for the armour and stuck some tin foil bullets and buttons on the front.

The helmet was made from a cat food box. I cut it into shape for her and cut out the T shapes eye hole. She covered it in tin foil and we placed some black card behind it. She also wore dark glasses so you couldn’t see her eyes through the hole.

We had already made a pod for Baby Yoda in the summer holidays. This was made from a cardboard box which we took apart and made into an oval. Then we covered it in tin foil.

Rose decided to be a witch. She spent ages making a dress from a bin bag and tin foil. The cat freaked out because it was so crinkly.  She made a witches hat using a bowl and card for the rim, covered in tin foil and a black bag. I didn’t think it would work but it actually looked really effective. We used an old sparkly black dress with the arms folded inside as a cape.

The girls were really happy with the final result!

We were so pleased with how the costumes turned out and the fact they were free to make. As a prize we had a big box of sweets from Freeze Debt. They will keep us going for ages. It was full of gummy witches, oozing brains, fangs and eye balls. The rest of the day was spent with an art challenge painting the pumpkins, pumpkin carving, apple bobbing and a game devised by the twins where you were blind folded and had to guess what chocolate bar you were eating. We watched the new Scooby Doo film and played board games. It was a lovely day.

Disclaimer: We were sent a Halloween hamper in return for this post.

Check Out Our Other Costume Ideas