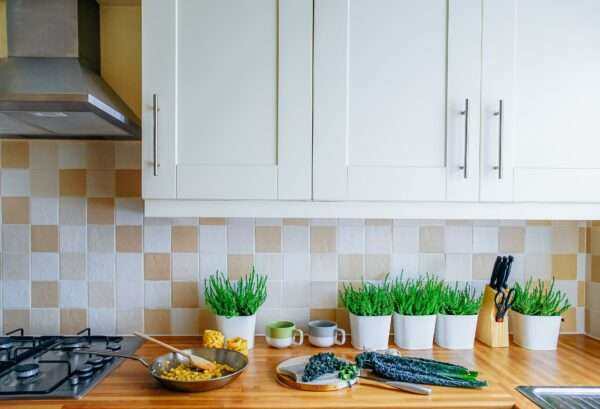 This Summer I decided that I wanted to spend a bit of time doing up the house and have a staycation rather than go on an expensive Summer holiday. We’ve been in our house for a few years and although it didn’t need any decorating when we moved in – with three children it’s definitely starting to show signs of wear and tear. Unfortunately, our budget doesn’t extend to a whole new kitchen so instead, we’ve looked at lots of ways to give it a facelift while keeping the cost low.

One of the biggest areas of the kitchen and probably where you spend the majority of your time is at the kitchen sink. It’s often neglected and left until last when updating your kitchen. However, a new corner sink will instantly make the room sparkle like new.

Until I started thinking about kitchens I didn’t really consider how the design of the taps has changed over the last few years. I think this is one of the areas which really makes a kitchen looks dated. A new set of kitchen taps costs very little but can instantly update your room. Also it might seem like a little thing but a good set of taps will actually make the horrible task of washing up more

Tiling the kitchen is expensive and complicated. We’ve recently added new floor tiles to our utility room and it cost more than we were expecting and took twice as long. Instead of getting new tiles you can give the tiles a really good clean. You could also redo the grout rather than the whole tile as this is often the part which looks grubby.

The cupboards in our kitchen were looking a bit faded and had some marks on them. As the cupboard itself was still very sturdy we decided to give them a lick of paint to freshen them up. We used a light colour paint to give the room an airy feel. Then we bought some more expensive fittings and the whole thing looked far more expensive.

It’s often the finishing touches which really make a room seem like new. Check your kitchen accessories are looking their best and replace them if not. If you have a new sink then remember to buy a new draining board as well.

Disclaimer: In Association With SuperBath