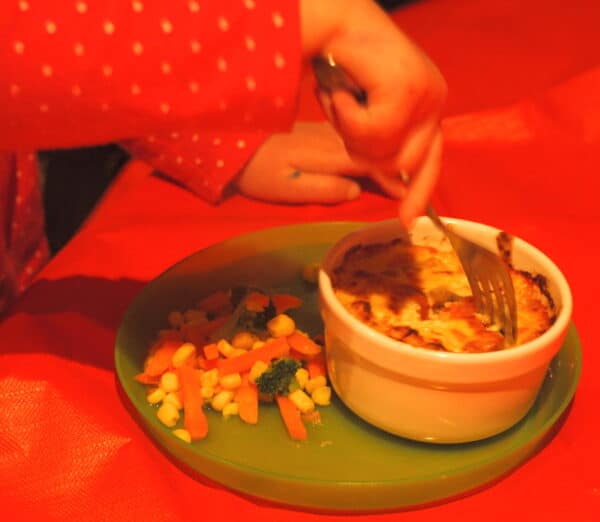 Here is a Greek Recipe as part of the Around the World series. This recipe for Moussaka is probably the first thing I learned to cook properly. I always liked it as I was studying Ancient History and so loved all things from Greece. This recipe is uses minced lamb although I tend to substitute beef mince as I prefer it. In Summer I would serve with a salad but as it’s really cold here we had it with mixed vegetables.

Fry the onion until golden then add in the mince for a few minutes until browned.

Stir in the tomatoes and spices – leave to simmer for a couple of minutes.

Melt the butter and stir in the flour, cook for a couple of minutes. Blend the milk in slowly until it thickens. Take off the heat and add half the cheese. Beat in the egg.

Allow the children to assemble their own mini moussaka. They will love the chance to make a Greek recipe as special as this one and the toddler sized portions are so much more appealing for small appetites.

First put in a slice of aubergine to the bottom of a small ramekin. Add a small amount of the mince mixture then another slice of aubergine. Top with some of the egg sauce and sprinkle the rest of the cheese on the top.